A few weeks ago, in the midst of the election fervor, I posted an entry (What’s Race got to do with Anything?) talking about the multitude of ways in which the construct of race influences our lives as minorities in Singapore.

By my standards, it was very well received, and people (even strangers on the internet!) have commented that they had never thought about some of the issues I’d raised.

But that’s not the point of this entry. No, in this entry, I wanted to share a little about my experience in actually writing the article itself and some of the curious (to me) emotions and feelings that came up.

Some friends had also told me that they were curious about what it was like writing on a topic that is highly sensitive and perhaps quite heavily “policed” – one has to look no further than Raeesah Khan’s and Preetipls’ experiences (among others) to realize that a minority commenting on race relations in Singapore could face some sort of backlash.

Indeed, after I published that piece, some people also said I should consider entering politics, but I laughed off their suggestions as absurd – because I’ve written about race issues in Singapore, and confirm, chop, guarantee if I run for office one day, someone will dig it up and file police report or I’ll kena POFMAed (keep reading if you don’t know what this means).

So here’s my reflection on what it was like to write that piece.

When I first set out to write the article, I was rather riled up. [You can read more about why I even started writing it in the first place in this other post: Why was I even Writing about Race in Singapore?]

There was a lot of frustration, resentment and anger, and ultimately I decided I’d publish my thoughts as an article on my own blog.

So I started constructing my article – outlining the main points I’d be touching on, and organizing my ideas to make sure they flowed well etc.

And in this process, some of that initial anger waned, and rationality set in.

I realized that if I wanted to be taken seriously, I had to make sure nobody could dismiss my work for being overly emotional, exaggerated or just put it down to “angry Indian person ranting”.

You see, in recent conversations I’d had with some friends where I’d shared these same thoughts I highlighted in the article, I was told “really meh?” and “are you sure you aren’t just blowing things out of proportion?” and “can’t be true la!“. It became evident that in order to be heard, I had to speak a language they understood.

I started dialing back the tone of the article, to make it more “research-y” and less “shout-y”. Added in links that backed up all the claims I was making. Double-checked them to make sure they’re from “valid” or “reliable” sources (i.e. state sponsored media, not alternative “less credible” media platforms). Made sure I wasn’t making any claims that were too “out-there”, despite the fact that really, the underlying premise of the article was that racism and discrimination on the basis of race does exist in Singapore.

As I wrote, I also started feeling some creeping anxiety building in me. What is going on? I wondered, Why is writing this article making me so anxious?

And what I realized is that my social conditioning (is this what you call it?) was kicking in (and kicking my ass).

In Singapore, the prevailing narrative we’re taught from a very young age is that Singapore is a multi-racial, multi-cultural wonderland where people of different races, ethnicities, religions, languages, cultural backgrounds etc. all live together in peace and harmony.

This message is in our textbooks that depict Xiao Ming / Mei Mei, Ali / Siti, Muthu / Devi and Peter / Sally (CMIO, represent!) all playing together. It’s in the annual celebration of Racial Harmony Day. It’s in every facet of life in Singapore that extols our racial integration and proclaims that we are One Nation, One People, One Singapore.

Of course race is not an issue in Singapore. So why am I writing about it at all? Talk about cognitive dissonance.

But that wasn’t the whole source of my anxiety. No, not at all. (Ha it’s funny – I feel a similar anxiety creeping in now, as I write about this.)

In Singapore, it is commonly accepted knowledge that everything we do is quite heavily “policed”. Foreigners make fun of the fact that chewing gum is illegal in Singapore (it’s technically not, but let’s not get into that) and that we caned (corporal punishment yo!) a foreign kid for vandalism in the 90s. There’s a hefty fine for just about every misdemeanor small or great, and jail terms or even capital punishment (yes, we still have the death penalty) for more serious offences like having a bit of weed.

And this policing extends to even the things we say (both online and offline). Yes, it’s a fact that Singapore ranks really poorly in terms of freedom of speech (#158 in 2020 by Reporters without Borders) and both Amnesty International and Human Rights Watch have commented on the lack of certain freedoms in Singapore, such as freedom of peaceful assembly and expression.

How is this possible! you may be wondering (or not, maybe I’m the only one who wonders these things). Well, the government keeps us in check using a variety of “tools” (of which I’m highlighting the ones that are tied to the issue of freedom of expression and / or issues relating to race), but which also contribute to a larger suppression of people’s voices.

So while the government may say that we Singaporeans are free to express ourselves and speak our minds, there’s always a little clause at the end – within reason. And it remains to be seen who decides what is reasonable (Spoiler alert: It’s the one-party supermajority government.)

Anyways. Here’s a quick look at some of the laws / statutes / legislation that exists in Singapore that have contributed to my feelings of intense anxiety in writing a simple article about race in Singapore.

298A.  Whoever — (a) by words, either spoken or written, or by signs or by visible representations or otherwise, knowingly promotes or attempts to promote, on grounds of religion or race, disharmony or feelings of enmity, hatred or ill-will between different religious or racial groups; or (b) commits any act which he knows is prejudicial to the maintenance of harmony between different religious or racial groups and which disturbs or is likely to disturb the public tranquility, shall be punished with imprisonment for a term which may extend to 3 years, or with fine, or with both.

Raeesah Khan, Preetipls and her brother, and Sangeetha Thanapal (who coined the term Chinese privilege and wrote about racism against brown people in Singapore) are some instances in which this piece of legislature has been used. Seeing as how just about anybody can file a police report about this, really it is not unimaginable that probably any instance of talking or writing about race could be investigated for “promoting disharmony between racial groups”. It would appear then that any talk of race, or racism, or racial discrimination would be discouraged. And who does this benefit?

On a personal note, when I was younger, I remember being cautioned against saying negative things about the government by some older family members. Why? They remembered people from the ISD (Internal Security Department) appearing in the dead of night and arresting neighbors or friends for saying similar things. If you don’t think this is extremely creepy and troubling, well – in my defence, I was young!

Given this context, I suppose it is not entirely unnatural that I started feeling anxious about what I was writing, as I was writing it. Even though I knew that there was (is) nothing wrong with any of the things I was saying. Ha, before publishing the article, I discussed this very issue with some trusted friends – of whether someone was likely to file a police report against me or if it would be POFMA-ed. 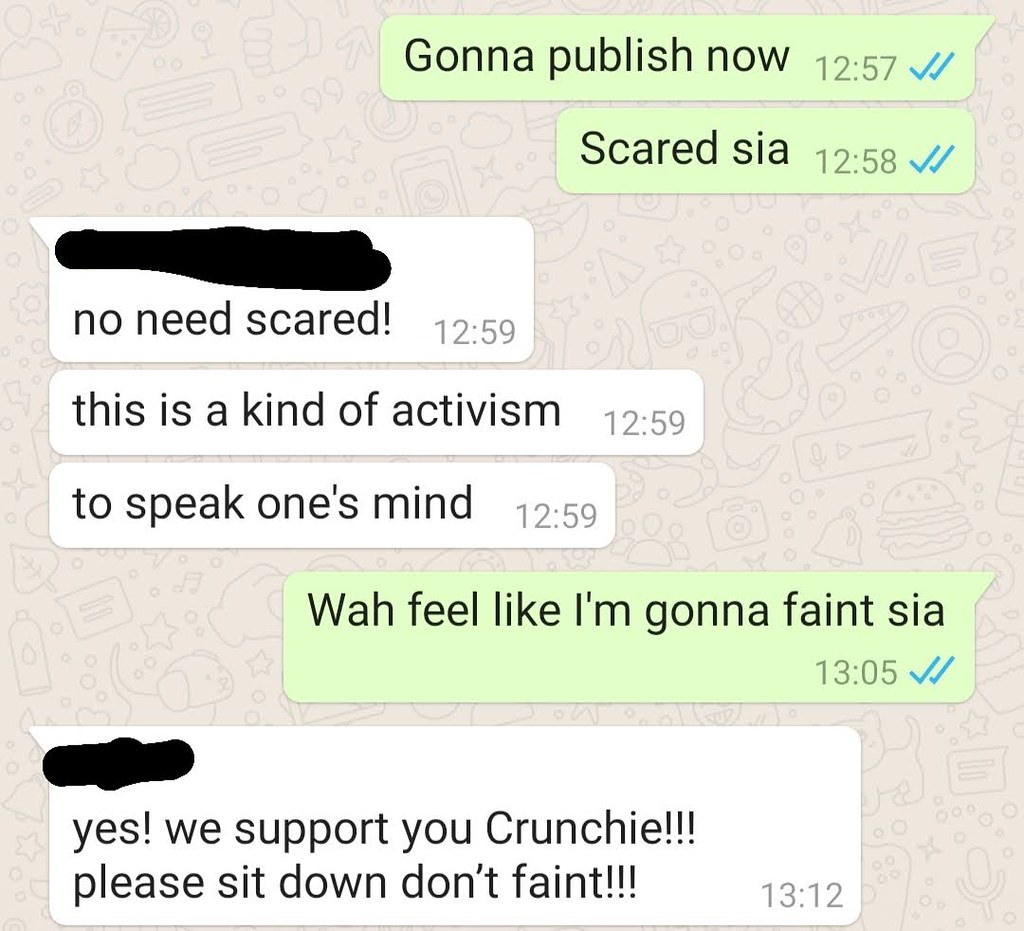 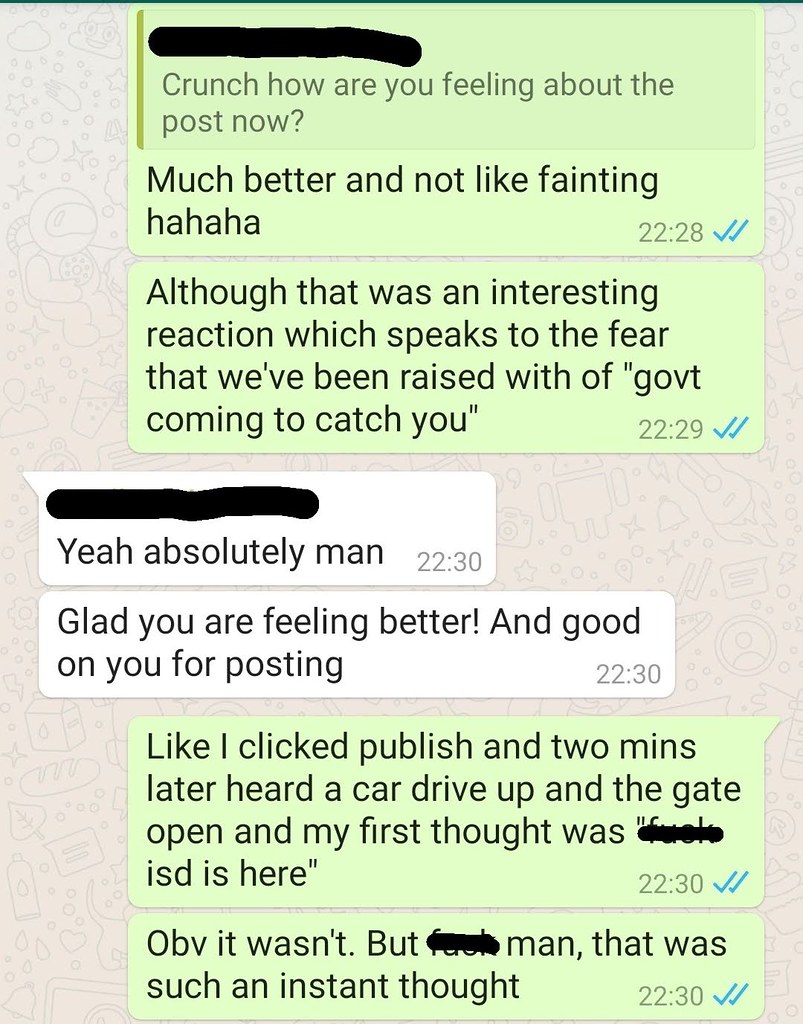 Guys. The FEAR was real.

Maybe I’m just a big chicken-hearted person. Scared of everything. And I don’t mean to praise myself for being brave and publishing that article either. It was something I felt really strongly about sharing, and I did. But it was quite a aaaaaaaa experience.

I suppose nothing’s going to happen to me cause it’s been up for almost a month and no authorities have come knocking.

But in any case, I felt like I needed to share this rather strange, somewhat surreal experience of writing something like that, in my own tiny capacity. I can’t imagine how other social activists who write or speak about these issues on a regular basis deal with this, and really, this whole experience has given me an immense respect (not that I didn’t have any respect for them before this) for these people and the work that they do, often at great personal cost.

Mad props to you for making it all the way to the end of this! If you did, drop a comment to let me know your thoughts or just give me a thumbs up / thumbs down haha.

Till next time (if I don’t get hauled away in the dead of night *wink*)!

One thought on “Writing About Race in Singapore – A Reflection”